Hot Shots or Hot Shots Part Deux? The age old question. Both funny films in their own right. Is it won by Admiral Benson’s declaration that, on seeing his men ready to fly their mission, saying “What I wouldn’t give to be 30 years younger. And a woman.” Or is it won by President Benson’s declaration to Saddam Hussein that they’d “settle this in the ol’ Navy way. First person to die, loses.” I don’t know, and I still can’t split them easily, but if you forced me to, I’d say that I’d fallen for the first one, as Topper said, “like a blind roofer.”

And so, if you’re still reading, I think I’ll go for New Toys part one (the FT-857) as my preferred new toy, although part Deux is still good too. I have a need for a good portable antenna that doesn’t require a 7m squid pole, and after reading a few reviews, I went with the Buddistick. Andrew VK1NAM is a fan of the RHM8 by Diamond, but a lot of NA SOTA folks use the Buddistick or Buddipole. The price wasn’t substantially different, so I went with the Buddistick.

It’s very portable, coming with a nice carry case that would fit nicely into a suitcase or backpack, and in testing on the weekend proved itself to work very well. I had it set up outside and was able to work several ARRL DX stations with it, including K3ZJ who gave me a 5/7 from a 100W nominal signal (peaking about 70W), and AG5Z in Mississippi, who gave me a *cough* 5/9. A 5/9, you say? You must be joking! If I were joking, I would have said, “What do you do with an elephant with three balls? You walk him and pitch to the Rhino.”

These were my first two NA stations worked, and with a compromised vertical antenna, with some good signal reports. Of course, the 5/9 is just the contest exchange, but I didn’t get the sense I was low down on any of the contacts. Using the principle of reciprocity, given their 500W outputs and 5/7 signals, my 100W or so was probably about a 5/4. So I’m happy with the performance, and happy with the portability of it. I’ll still use my linked dipole around Victoria, but if I activate when I travel, the Buddistick will be the first antenna thrown in.

A zip up bag with two antennae, height extenders, a loading coil, a long wire counterpoise and a mounting clamp. 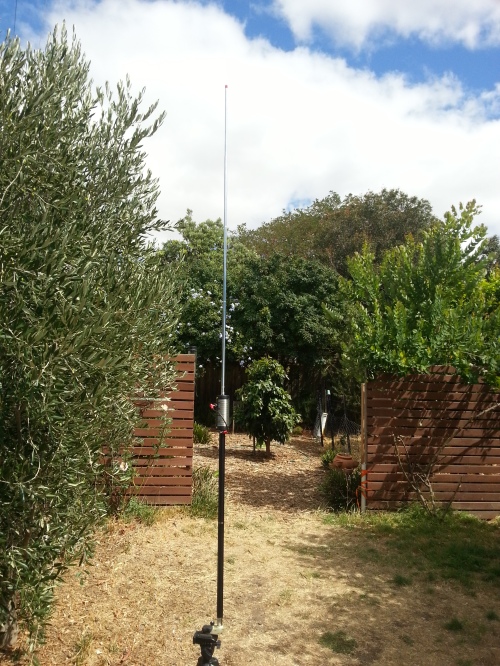 deployed on a cheap camera tripod