In what must seem a common refrain, work found me heading to Seoul. I already had regular contact with Andrew Errington HL5ZBA from when he was Japan bound and was aiming to catch up with him on a summit. By doing so, I’d get my fourth continent activated. Andrew suggested I also reach out to Jason HL4ZFA, the HL association manager, who was most helpful in providing example summits.

I had an option of heading out early and activating a 10-pointer, Balwangsan, but the traffic on the trip back in would preclude seeing Andrew, and besides, I had to admit the only reason I was truly interested in it was the schoolboy humour in its name. After consultation with Jason, Ansan HL/SL-008 was chosen, and both Andrew and Jason indicated they would meet me in Seoul to have something of a SOTA catch up.

Ansan is a relatively small mountain at 296m, but it controls the northern reaches of Seoul, and was strategically important enough that Seoul itself wasn’t entered until Ansan (or Hill 296) was taken. The 5th Regiments of Marines spent more than a few days removing DPRK troops from the area. Seeing the terrain, it would have been a difficult fight. 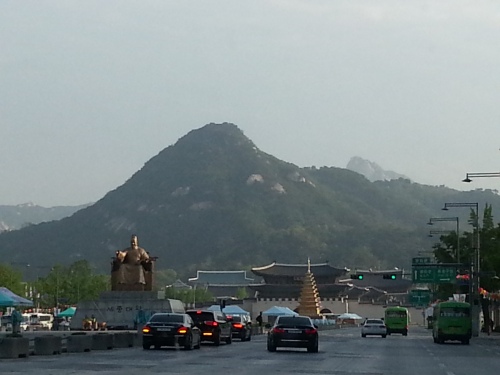 Mountain (Ingwansan? Ansan?) on the drive to Ansan. Close by Ansan anyhow.

I had planned to tackle the summit via Dongnimmun station, but as I was leaving the hotel, one of my reports at work (Hwanii) phoned me and said he was 7 minutes away from my hotel and coming to pick me up. He drove us to the north east side of Ansan, where we parked and started to climb. This cuts a bit of the mountain’s height off, and makes the climb comparable with say, Flinders Peak VK3/VC-030, although a little longer.

The map to the top. I couldn’t find a decent trail map before arriving. Let this serve as a woefully inaccurate facsimile

Eventually, we reached the top. I had indicated my original plan of being active at about 2300 UTC was going to be tested by getting up late and then having to go back to grab my Korean license. In the end, the chauffeur driven service had cut that time right down, and at 2250, we were on the summit.

Me and Seoul, on top of Ansan

A early Korean warning beacon from the Joseon era

I set up the Buddistick vertical for 10m, using an ATU instead of the supplied coil, and the FT-857, set at around 50W. I called CQ for a while, and was faced with silence. I had a flashback to my WWFF activation of Jimbasan-Takaosan in Japan, but this time I could hear, low down, a VK station.

As the QSB took the signal higher, I heard Tony VK3CAT at a 31 to my 43 report. We went back and forth and Tony couldn’t confirm the report, but eventually we gave up. 20 minutes or so after starting to call, Glenn VK3YY called me with 21 reports both ways. Glenn had activated Ansan himself, so I gave him a SOTA Complete.

The band opened up during my QSO with Glenn, and Tony was able to come back and complete his report, with him at 51 and myself at 53. Shortly afterwards, Ron VK3AFW gave me three VK contacts from the summit. THere was suddenly a distinct chance of qualifying the summit with VKs, which would have to be the first time that’d happened on a HL summit.

Unfortunately – if you can say that – HL1SB came back with a booming signal from Gangnam. Line of sight and 50W will do that, and 59+20dB signal reports were exchanged. I tried 17 and 15 to no success, but by then, I’d been interrupted by a strange man filming me. It was, thankfully, Jason HL4ZFA. Jason borrowed my equipment in the hopes of scoring a VK, but had no luck. His 2m HT was picking up plenty of signals, but we found a summit that was just a fraction too far to get a reliable signal.

We repurposed my radio and configured the Buddistick as a 5/8th or thereabouts vertical for 2m. We were able to make contact with 6K2IRK, portable on HL/CN-089, exchanging 53 reports. After a few fruitless calls and no other summits on offer, I decided to grab the HT and descend the mountain to chase Jason to complete the HL association for Mountain Hunter too. I gave Jason a call, exchanged reports, and then was called by Andrew HL5ZBA who’d finally decided to show up. I gave him a contact, and reascended the mountain – no easier the second time.

We qualified the summit for Andrew, and then packed up, taking a photo with a flag Jason kindly gave to me. I will fly it at my next SOTA activation.

We descended the mountain and went to a ham swapmeet at Yongsei University. It was the usual stuff, so we went and had lunch, before buying beers and drinking them outside of a 7/11. Andrew decided he needed to head home, so we dropped him at the station, but Jason and I weren’t yet done. We were dropped at the base of Guryongsan (HL/SL-006) and started to climb (after purchasing water for the climb, and beer for the top). Guryongsan was a bit harder to climb, but the views from the top were stunning.

We cracked a beer, and set up. My battery was close to flat, courtesy of the extended FM session on Ansan, and I made one contact on 10m before it went completely flat. This was to JA3AOP who was calling CQ contest. With a flat battery, my intention to work 20m into Europe as the sun set was thrown a curve ball, and I was left cadging contacts off Jason’s 2m HT, complete with new antenna from the swapmeet.

It took about an hour, but eventually we were able to call success and descend rapidly, discussing recent SOTA General Rules changes. I can call success on 2 summits (1 point each), a new association activated (number 11), a new continent (Asia), and a new association chased (number 9). My aim now is to get continent number 5 in the bag when I visit South Africa later in the year.

Does this man look happy at getting 4 in the log? 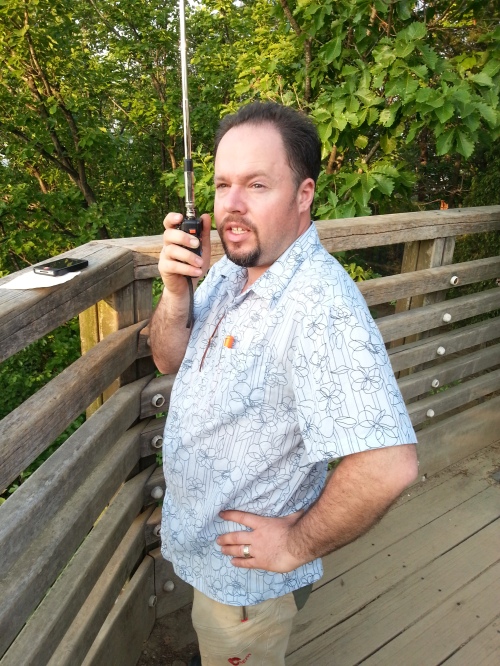 Thanks to Jason and to Andrew for a great day’s SOTA, and for the warm welcome. I can recommend both Ansan and Guryongsan as easily activatable summits in the Seoul area. Success can be had with a 2m HT on these summits.