Driving back from Mt Donna Buang, I decided to deviate off to check out Mt Dandenong. I drove up to Sky High Mt Dandenong, and noticed there was a $5 car parking fee. I had about 30 cents on me, about $1.20 in US coins in my wallet, and about 70 yen in the car’s centre console. So, I did a U-turn and kept going back home.

As I drove down the Princes Freeway past Little River, the You Yangs tempted me, Siren-like, with the lure of an additional point. Could I make Flinder’s Peak my New Year’s tradition? The car took the exit of its own accord, and before I knew it, I was driving through Little River and into the park up to the Turntable Car Park, ignoring a hitchhiking Catholic priest on the way.

I grabbed the Buddistick this time, and made my way to the top. It was the usual painful slog, leading to a New Year’s resolution to improve my aerobic fitness, plus a lot of swearing. It isn’t that hard, but my fitness could certainly improve.

Once at the top, I set up on the Geelong side of the peak, away from the main path, attached the Buddistick to a tree, ran out the counterpoise westwards (away from the crowds), and called CQ. First up was Robbie VK3EK for a S2S on VK3/VG-074, before working 9 Chasers (including Craig VK3CRG line-of-sight to Lara, and VK3XCO in Torquay) and 4 more S2S (VK2IB on VK2/RI-009, VK3MTB on VK3/VT-057 and Tony and Allen, both on VK3/VC-005. I wrapped it up there with the 14 in the log, and headed back down. One more point in the bag!

It was recently brought to my attention by a friend of mine that this blog tends to sound like I spend my time begging my wife for permission to go up mountains with a radio. Those readers who have wives and children will appreciate the fact this friend is unmarried and childless. However, in the interests of avoiding another situation where it would appear – unfairly – that my wife controls my schedule, and indeed, to avoid a situation where it might appear that I am weak and callow and unable to demand my rightful man-time, I will avoid such statements.

Nay, we had an honest conversation, carefully stating each other’s position on the matter, accepting and acknowledging each other’s feelings, graciously offering each other compromise positions, before reaching a negotiation point where I caved and said, “I’ll do anything, just give me New Year’s for SOTA again!” My wife obliged. My friend’s estimation of my worth decreased. I cared not.

This year, I chose Mt Donna Buang for two main reasons. The UTC roll over would give me 8 points twice, and the fact I was 15 points from 100 activation points meant I would reach the first target. The second simple fact was that at 2 and a half hour’s drive, it was half the distance of a 10 pointer like Buller or Hotham, and therefore wouldn’t require as early a start.

I took the linked dipole, freshly fixed, and the Buddipole, the 857 and the 4.2Ah LiFePO4 battery. The drive up was easy, with almost no traffic, and I hardly had to worry about any cyclists. There were only two.

Passing cyclists on a windy mountain road always reminds me of the joke about the man who picks up a Catholic priest hitchhiking. The priest, tired, nods off, and the man drives on, spotting a cyclist riding ahead. He decides, immorally and illegally of course, to drive his car at the cyclist. At the last minute, as he floors the accelerator and is about to hit the cyclist, he notices the priest wake up and swerves away guiltily, but there is a sickening thud.

“Father,” he cries, “I’m sorry, but I think I hit a cyclist!”
The priest pats him on the shoulder and says gravely, “No, my son, I saw that you missed him.”
The man breathes a sigh of relief as the priest says, “But don’t worry, I got him with the door.”

As a person who doesn’t mind cyclists at all, I don’t know why that goes through my head, but perhaps it’s not substantially different to the lady I used to work with who once asked us if we ever felt the urge to push someone in front of a train. Um, no, but apparently that’s a fairly common sensation. So I do advise people to stand behind the yellow line to minimise the risk of someone fulfilling a fantasy, and I never pick up hitchhiking Catholic priests. Just in case.

In any case, I was set up and ready to go by 0950, and tuned around grabbing Summit-to-Summit contacts, six to start with, before I worked 5 chasers. Two more S2Ss were followed by a VK5, and then the S2S’ started to go crazy. I worked the two Andrews VK1DA and VK1NAM for a three-way Andrew-to-Andrew, now becoming something of a New Year’s tradition, although last year, VK1NAM, VK3BQ and myself were on different summits.

I worked Joe and Julie from Morwell NP, Justin VK7TW for a VK7 summit, before rushing a pre-UTC rollover S2S with Brian VK3MCD and Rob VK2QR. I went back to 7090kHz and found Rik VK3EQ/7 on Mt Wellington near Hobart, and he kicked off a stream of Summit to Summit contacts. In total, I worked 23 S2S contacts on 21 unique summits one after the other. Everyone was out.

My favourite QSO of the day was with Nick VK3ANL and Allen VK3HRA. Allen and I were just completing a S2S when Nick heard us:

I worked 10 more chasers, and then packed up, with Bernard VK3AV the last in the log. In total, 66 contacts across UTC, and over 200 summit-to-summit points. Finally, it got me over the 100 point mark, taking me to 101 points. At this rate, I’ll be a Mountain Goat around 2023. 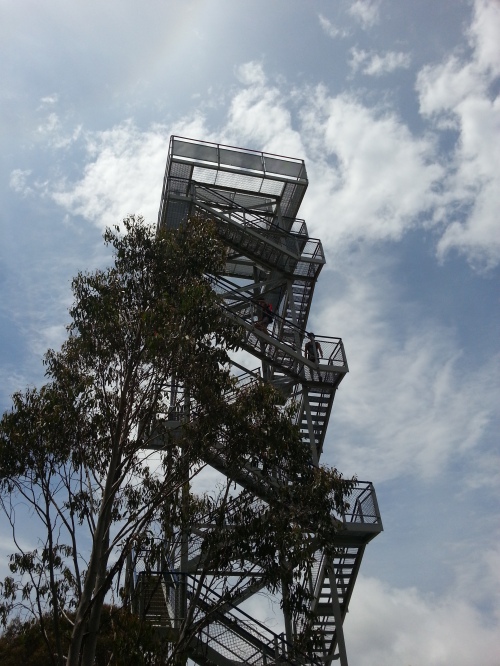 The lookout tower. I didn’t climb it

You know you’ve got things sorted out well when your wife suggests that we visit the Mornington Peninsula just before New Year’s, so that, “if we forget something, we can come in the New Year, and you can get more mountain points for that radio stuff”. Those mountain points (all one of them) come from Arthur’s Seat, VK3’s VC region’s smallest qualifying summit.

After a tour around Heronswood gardens at the foot of Arthur’s Seat, we went up to the summit and had lunch, before I dropped the family at a nearby nursery, while I activated the summit.

I set up on a picnic table near the top, with a reasonable amount of local noise, but away from the crowds. I used the Buddistick as the linked dipole was still in a tangled mess after I cracked it on W4C/EM-058. I strung the counterpoise out to a tree, and tried tuning up.

I didn’t have a lot of success on 40m, with an SWR around 2.5, but I cranked the power (it was only going to be a short activation), and got 4 contacts in the log. I decided I’d have a better chance of tuning the antenna up on 20m, so I adjusted the tuning coil, and went over to adjust my counterpoise. I was about to grab it from the tree when I got a big shock.

In the tree was a very tame Kookaburra. He was quite interested in what I was doing, only slightly wary as I got closer, but he had no problem with me taking photos and shortening the counterpoise, all within 2 metres of where he was. 20m tuned up a little better, but I only got one contact, Nev VK5WG.

I jumped back on 40m when I saw Andrew VK1NAM was on SM-065 in VK2, and I managed to work him, although difficult for the S2S. I then packed up, noticing, as I put the antenna bag away, that the cat had found a new place to sleep in our shed. I think the tuning problems were due to the steel frame of the picnic table – the Buddistick instructions are quite clear that nearby metal can dramatically affect tuning, something I noticed on G/TW-004 earlier in the year.