A quick trip up to Swan Hill to visit my parents in their new house meant driving up and down the Calder Highway. With the radios in the back, an urgent need to evacuate the bladder, and a SOTA summit right off the highway, Mt Alexander was activated in a very ad hoc manner on the way back.

I didn’t have long, so I grabbed the Buddistick, ran it up into a tree, and hooked it direct to the radio. SWR was higher than hoped, but I managed a S2S with Gerard VK2IO on VK2/ST-052, before grabbing the antenna tuner out of the car and tuning up by ear.

SWR was a little better, and I moved up to 7095, making seven contacts, some marginal. VK4RF was the furthest, and contacts across VK2, VK3 and VK4. No further responses to the calls, and I jumped back into the car and continued the drive home. All up, about 15 minutes of activation. 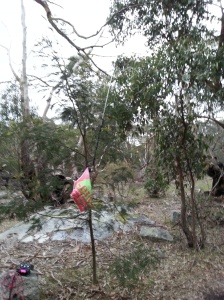 Buddistick up a tree. The SOTA Korea flag is shown, flown as promised on my next activation. I had planned to stream it off the counterpoise, but the eyelets are a bit small.