My now annual trip to Singapore for a work function was extended this time to include training the following week, allowing a weekend in Singapore, so the reciprocal license was applied for, and duly received, albeit after some substantial prodding of IMDA – the Singaporean ACMA equivalent. To be fair, when prodded, they moved quickly, and the amateur population in Singapore is only 50-odd, so we’re low priority, but it still took a while to get it, and it was looking hit-and-miss in the lead up to leaving.

I took a 2m handheld, rather than the HF gear, as I was expecting to be inundated with crowds at the summit point, and this was borne out. I could have strung out a dipole, but it would have been tight and conspicuous – something you should avoid in Singapore!

The Saturday morning arose, and after breakfast with a few colleagues also confined to Singapore for the weekend, I grabbed a fortuitous taxi that was dropping off another passenger, and headed to the Bukit Timah Nature Reserve. It’s about a 20 minute drive from downtown Singapore (I was staying in Anson Road), and cost about SGD$17 (about AUD$17…). It’s not obvious where the summit is until you get very close, because most of the buildings are taller than it.

The walk up to the summit is short – only about 1km, but is steep to start with, and made shorter but harder by the “summit steps”, which is the most direct route to the top. If you choose to avoid these, you can keep walking and approach the summit via the other direction. All up, about 15 minutes from leaving the taxi to being at the top and beginning to set up. 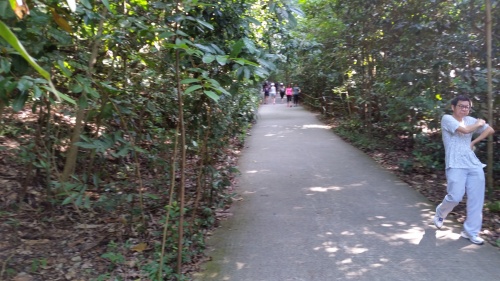 At the top, there’s a summit hut and a range of RF equipment. Apparently these towers are for military gear, and the signs on the fence indicating authorised personnel only (complete with image of a guy shooting an intruder) suggest this is the case, but they also appear to be in a state of real disrepair. Also near the summit is a barracks for those guards supposedly guarding the RF gear, but they appeared empty, and I saw no one in the time I was on the summit.

I grabbed some grass and pulled out the handheld. In Singapore, most hams monitor the 2m repeater run by SARTS, so I called CQ on that for a while, but got nowhere. No response, other than the usual key-up, and the repeater ident occasionally. After about an hour of calling, Mike 9M2LXM called me from Johor on the other side of the water in Malaysia. He explained that a lot of hams struggle to hit the repeater due to the high buildings and its location, but that he had a clear line of sight to it, as did I.

After a bit of begging, Mike moved to simplex to complete the SOTA contact. Having spent his time monitoring the repeater, he was having difficulty remembering how to remove offset and switch the set to simplex. 10 minutes later, he called me back on simplex, and we completed the contact, 51 given to 52 received, on 144MHz FM.

With no other takers on the repeater after moving back there, I ended up calling it quits with only 1 contact, but that was enough for the 9V association to go into the log and tally for Mountain Explorer, which now stands at 23 associations.

The main road next to the reserve

I crossed the road and headed back to the hotel via the MRT at Beauty World Plaza – only costing $2.20 – and then grabbed chicken rice at the local Hawker market. The following day I explored Sentosa Island with some work colleagues.