As luck would have it, a work trip to NZ was postponed from around the 1st of April until the 1st week of May, just in time for ZL3 to go live. This is twice now this has happened, and it is definitely coincidental. With flights in on Saturday, I figured I could try Altimarloch, a “drive up” summit south of Blenheim as a way to cross this association off the list, and get to 15 activated associations.

I offered Warren ZL2AJ a chance to join me for a joint activation, something he jumped at, and he flew into Blenheim the day before with his partner Emma, while I prepared ferry rides across the Cook Strait. I had never met Warren, but we had worked very closely on getting the ZL associations off the ground. I offered to pick him and Emma up in Blenheim, and he organised access to Altimarloch, via 2602 Awatere Valley Road. After initially booking a ferry ride on the 8am service, I changed instead to the sleeper service leaving 2:30am, but allowing you to board at 11pm and get to sleep.

I arrived into Picton at 6am, but could not pick up a hire car until 8am, so I leeched some free wifi in the ferry terminal for a little bit, before walking around Picton on my way over to the Avis car rental place. Like most of the South Island, Picton is nestled in between a valley that leads down to Queen Charlotte Sound, a fiord that would do Slartibartfast proud. For those curious, the difference between a Fiord and a Sound is basically in the spelling. 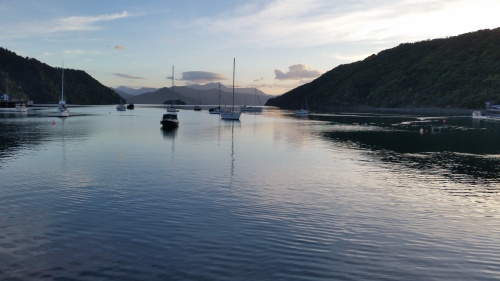 After arriving at the Avis terminal, I waited 30 minutes past 8am before speaking with the Hertz lady, who spoke to the Europcar guy, who called the Avis lady at her home, said nothing more than “It’s Mike from Europcar” before hanging up and saying “She’s on her way”. The answer was basically Picton time, that nebulous time so beloved of small country towns. As a regular car-hirer, she gave me a full size 4WD rather than the Rav4 I’d ordered, which was nice, and useful later on.

I’d told Warren I’d be about 9am in Blenheim, which, even with the delays, I only missed by about 5-10 minutes. Some of that time was spent with me staring open mouthed out the window at the mountain scenery – simply beautiful. We met at Warren’s accommodation, and then drove down to Altimarloch, the first gate being about 40-45 minutes from Blenheim.

In total there were three gates along the track we took, and I’d rate the track up to the third gate as easy 2WD material. From then on, it became a bit more obvious that were going to be climbing 1500m in altitude. The track was never narrow, but there were steep dropoffs and large rocks that made me hope there was underbody protection on the 4WD. I am not sure a Rav4 would have sufficient clearance over some of the rocks – well, the first one anyway..after the sump is out the way, there’d be a heap more clearance!

My overriding thought as I stared out the window was that the side of the mountain seemed to be a steep cliff, and we were climbing it. We reached the top after the track widened out along the summit ridge line at around 10:30am, with the association going live at 12 midday. We set up and took photos until about 11:30am, had lunch and then got out to activate. 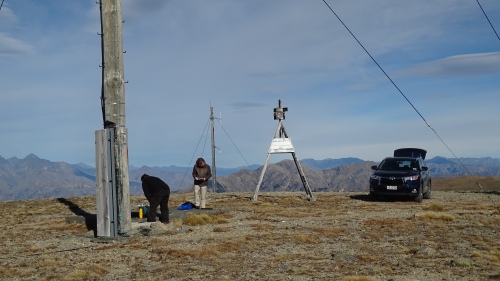 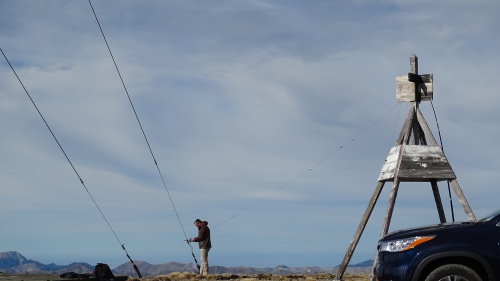 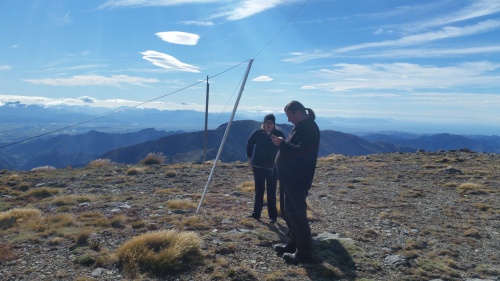 Warren and Emma set up an 80m dipole

I was using about 25W into a linked dipole at 4m height, courtesy of the Shrinkenpole. It worked far better than the last time I’d used it, so I think I will consider bringing this along on future overseas activations, weight notwithstanding. The radio was the usual FT-857. Warren uses a KX-3 and somehow managed to bring a 163Wh battery along through Blenheim airport.

Internet coverage was intermittent, so I texted Andrew VK1AD my frequency, and he was the first QSO in ZL3 worked. I stayed on 20m for the majority of the time, with Warren on 40m, and us moving between each other’s stations to chase S2S opportunities. I ended up with another 17 S2S points, which leaves me at 998 S2S points. I’ve already castigated Allen VK3ARH for not being on a six pointer instead of his 4 pointer 🙂 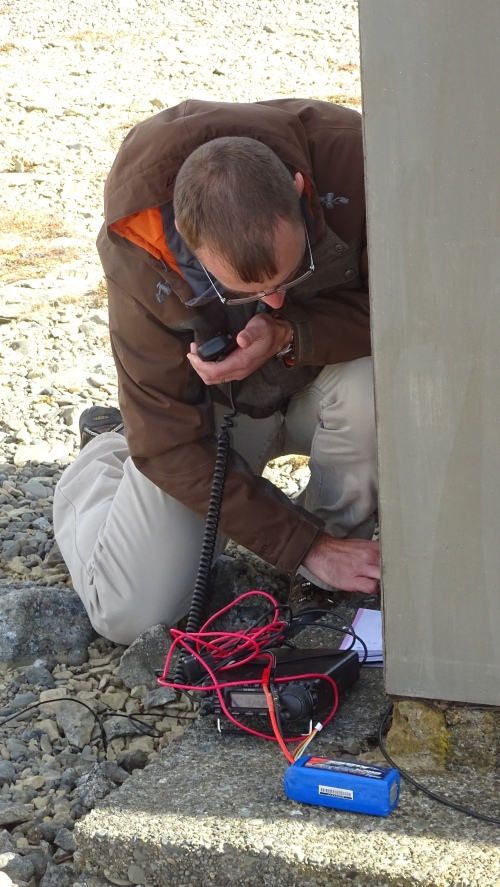 Completing a QSO, whilst squatting heroically

Plenty of summit infrastructure to attach squid poles to

After a while, the SSB QSOs dried up, so I switched to CW, harder as I now had a big prefix to my callsign to remember. I mangled the callsign many times over the next half an hour or so, but worked into ZL1, VK2, VK3 and VK5, with the highlight being a contact with John VK6NU, about a 5000km QSO. 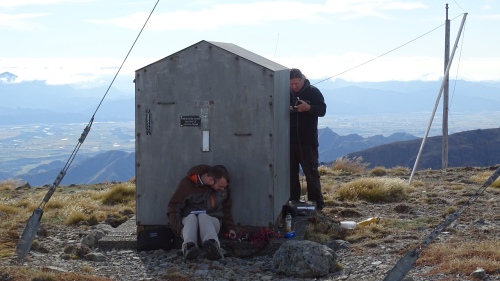 Working CW on 20m, a picture of concentration

I got up and walked around a bit after that, playing with my 2m handheld. I walked out of the activation zone to work Warren, as well as Paul ZL2RE on another Marlborough summit. Paul and Warren were working hard on trying to make an 80m QSO, but local noise was causing difficulties. 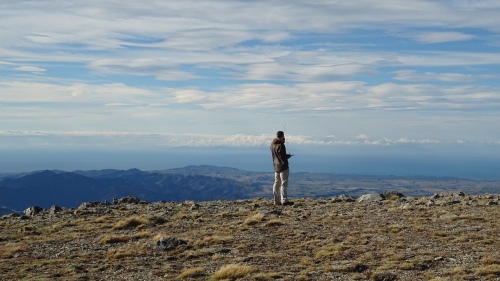 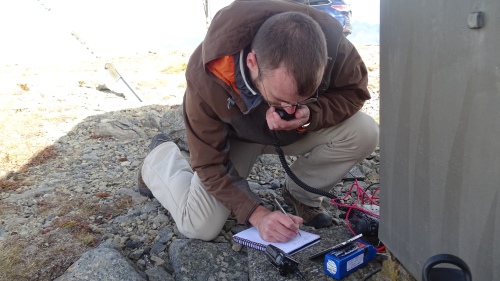 After the pileup receded, we realised we needed to pack up and head back into Blenheim, so I went QRT (Matt VK2DAG just managing to scrape in), and we packed up and headed down. The trip down was interesting for two factors – one, the steepness of the descent and the smell of the brakes at the bottom (no fade, but they sure were warm), and two, the fact my drink bottle was nicely crumpled due to the large pressure differential of about 5,000 feet (1693m to near enough to sea level). I haven’t seen that before – Altimarloch was actually the highest mountain I’d successfully activated (Suikerbosrand in South Africa was about 200m higher, but that whole area is already 1000m above sea level).

I can’t stop talking about the view. It was simply stunning. You could see right up to the North Island, and in all directions. The photos can’t do the view justice.

In all, I had a great time with Warren activating. The goal of association 15 was met, so I now qualify for Mountain Explorer Gold level, and the ZL3 association chased now is Mountain Hunter Silver. I missed out on the S2S goal of 1,000 points, but that will happen soon enough. The more important thing was that Warren and I got to spend some quality time activating together, as well as great conversation. Hopefully we can do many other activations together.

After dropping Warren and Emma at Blenheim airport on the way back, I drove around Picton a little bit more, before returning the car and walking back to the ferry terminal. The ferry ride back was much less calm then the ferry ride over, particularly as I was tired, but I made it to Wellington without going the vom, and made it back to the hotel around midnight.

A note regarding the photos – the vast majority of summit activity was taken by Emma, particular those photos with Warren and I in them. She has kindly allowed me to use them on my blog. I have only one criticism, and it’s the photo of me squatting above, for what it reveals of my hair.

Clearly, the attempts over these past few years to deny global warming-like the receding nature of my hairline has reached a point that I must deny my ideology and accept it is happening. So the question to the group now is, should I take the plunge and just go over the top with a well-placed No 4 clipper?