On my last trip to Sydney, I had caught up with my old friend Leighton, who first showed me the pleasures of amateur radio when he had his Novice Limited call back in High School. Leighton now works up in Sydney, but maintains a callsign of VK2LI. Plans were hatched that when he came back to Geelong for Christmas, I’d show him the delights of SOTA.

Having then tried to find a decent day that worked for us all, we settled on Sunday the 20th of December, as it was hoped a cool change would bring relief from the 40+ degrees celsius we’d had for the previous two or three days. Saturday had yielded a 45 degree stinker at Geelong, but we held firm. The forecast was for showers to come through about 2pm at Stawell/Halls Gap, so the Grampians looked like a good option. Mt William and Boroka Lookout were chosen. I also eyed off Mt Warrenheip on the way back, if we’d taken the loop option back via Ballarat, for an easy 4 points to take me to 150 points.

The latter wasn’t an option in the end: 45 degree days mean high winds and the inevitable bushfires, and one hit near Scotsburn, Clarendon and Elaine, closing the Midland Highway. This prevented access to Mt Warrenheip, but of more concern to me was seeing how close the fire was burning to Allen VK3HRA’s place. Luckily everything was fine for Allen.

The road closure meant we had to travel to the Grampians via Bannockburn, Skipton and Dunkeld, but the difference in time is minimal, and we reached the Mt William Carpark close to UTC rollover. The sign at the bottom said “Strenuous Walking Required”, which seemed ominous. It was still warm at Mt William at this point, and the wind was very strong.

One of my great fears when walking with others is being the slowest, least fit person in the group. Leighton has a history of bushwalking long distances, so I was prepared to be the weakest link, but a comfortable life in New South Wales has turned him soft, and thankfully he was huffing and puffing more than I was. To be fair, strenuous walking was definitely required. I was pretty stuffed by the time we reached the top too!

It took us about 30 minutes to walk to the top and we set up just after rollover, on air about quarter past. I put up a spot, and we called CQ for a while. We were using the linked dipole, and the FT-857. I had the dial on 5 watts nominal, so under battery it’s about 3-4 watts out. The breeze was blowing, and we weren’t sure if the dipole would hold at the top of the squid pole, but thankfully it did!

The dipole flapping in the breeze. Wind speed indicated by coax distance from squid pole.

Conditions were pretty good, and the summit was qualified in about 10 minutes. Leighton’s dad, Ian, VK3LIJ is also an amateur, and he called in for his first SOTA points too, before we worked Leighton’s son as well during the exchange. Apologies to the waiting chasers as we had a long QSO with Ian, but it’s important to bring more into the SOTA fold!

I handed the microphone over to Leighton after working my 4 to qualify, and we basically swapped the microphone between each other as needed. I worked 9 stations on 40m, and 2 on 20m. Leighton worked a similar amount, including one person who was determined to tell us we were not supposed to be in a National Park on a day of a Total Fire Ban.

To be clear, access to NPs is restricted on Code Red and Extreme fire danger days, while it was a Severe fire rating day in the Grampians. Days of Total Fire Ban are usually declared on days of Severe or above. We had specifically checked access requirements beforehand, given what had gone down at Scotsburn overnight. 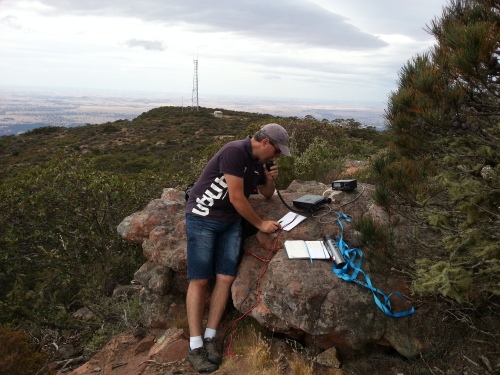 Leighton works the pile up 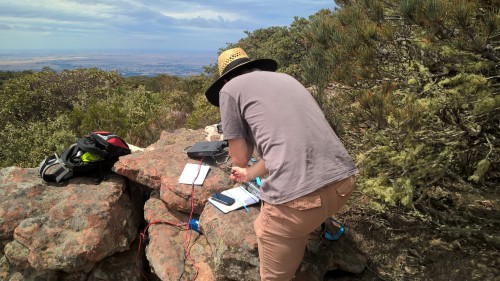 As we hit midday, we decided to pack up and head back down, with a few drops of rain coming our way as we headed down the summit, and on the drive over to our next summit near Boroka Lookout.